Inspired by @scottyp scripting school, I’ve decided to finally dive into Qt documentation and @Kapyia and @slightlyangrydodo’s plugin (which is a treasure full of complex scripting tricks - thank you guys).

For those who don’t like to read long texts, here is a short feature showcase video: 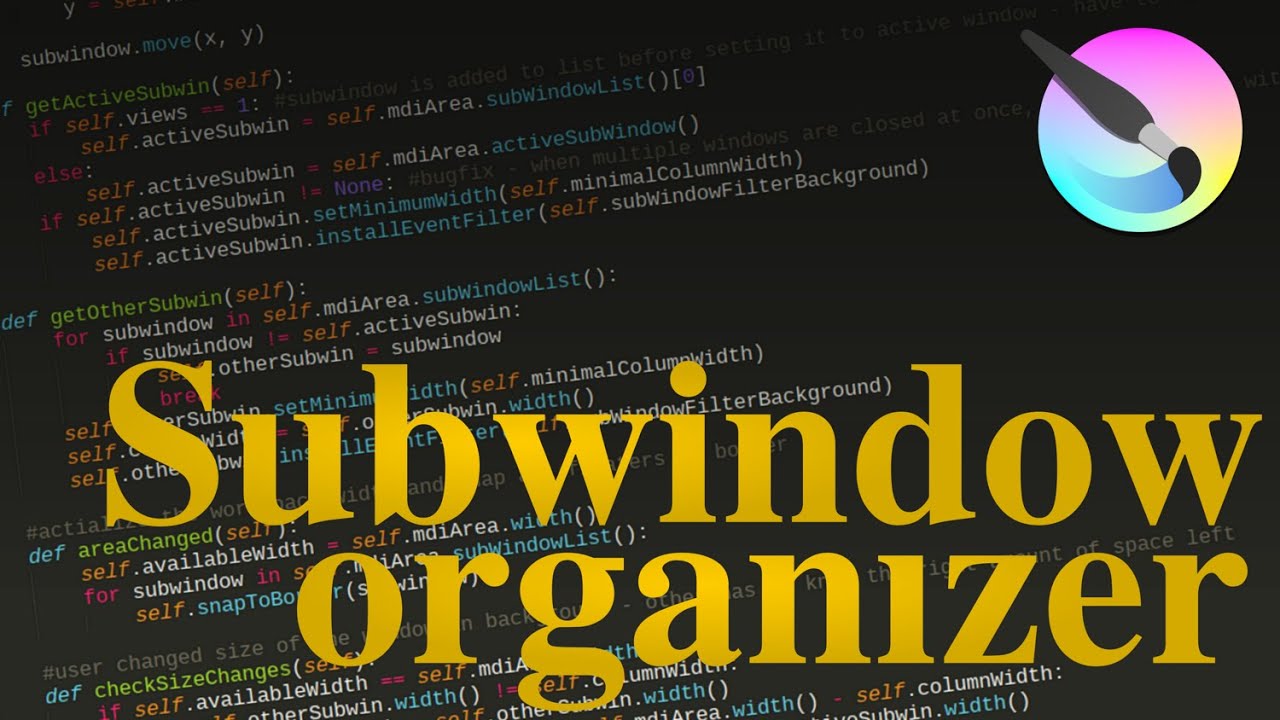 Add-on can be downloaded from Github. And for those who like to read, here is a full description I wrote on github:

Requirement:
‘subwindow’ mode is enabled, instead of the default ‘tabs’.
Can be configured in Settings > Configure Krita... > General > Window > Multiple Document Mode.

New actions are on the bottom of “View” menu. Keyboard shortcuts can be changed in settings.

Wow! That sounds as if I could finally start using subwindows

I mean I just watched a video for now, intrigued by the title, but looks amazing.

If the plugin is ready to be used, please add it to the resources page? Instruction here: About the Plugins category

I never leave subwindows mode, and dreamt of fixing those small issues for a while.

Yeah, I already promised to add some add-ons, and never did - but this one is definately the most advanced and I’ll really want it to be there. I’ll just have to work on it for a while to make sure I already fixed all those ‘crushing’ bugs

And by the way, how adding the brush presets to resource page looks like? I’ve seen that apart from the links, some kind of header image is needed there - do one need to clone and push those changes into the repository, or it’s not that different, than adding the plugins there?

And by the way, how adding the brush presets to resource page looks like? I’ve seen that apart from the links, some kind of header image is needed there - do one need to clone and push those changes into the repository, or it’s not that different, than adding the plugins there?

You need to fork it first, and then if you’re not easily scared by elaborate GUI, just add a new branch in your fork, add the picture, change the page to show your picture and link to your bundle, and then submit a MR.

Ok, thanks - that’s what I thought it would look like. I guess I’ll do it then, once I have some time.

Very nice. You are picking up this plugin stuff pretty well! I took a look through your code and you are doing some pretty tricky stuff.

Thank you - the UI redesign code helped me a lot, showing how to get deeper into krita objects: mainly intercept events.
The code is a mess right now :D, and I’ll probably have to organize it before I start working on it again. I really hope I’ll be able to get into canvas variables in those views: pan, scale, rotation and mirror…

Thank you for this useful plugin! The subwindow mode is normally really fiddly to use, this is a lifesaver! I’m really looking forward to future updates. What about an option to split each viewport vertically/horizontally (like in Blender)?

You’re welcome! I hope you’ll find it useful (I must admit that after a week of development, it’s the first day for me that I can actually use it, and I was just adjusting the views a lot just for the pleasure of it

Funny how I was inspired by blender behavior, and thought about the exact thing. Technically there shouldn’t be that hard to get all those features - opening another view of the same document if the moved edge was on the border of workspace, closing views when width or height gets to 0 (but this can cause problems with accidentally closing artwork - in blender you have only one document so it’s ok).

It feels like a over complicating the problem - when drawing you usually just use one canvas, may want to open some additional reference images or canvas overview, but having so many views don’t feel that necessary for me - what works for blender doesn’t have to work here - then there will be problems with opening new images, as you would have to create a view and then assign it to the view, while now you just open it.

But if somebody wants to do that, feel free to experiment with this code. I think it’s possible to do, and I can help with explaining how to do it.

I would rather expand it to allow move reference/overview subwindows in the column on left. Currently there is zero (one window mode) or one (split screen), but it would make sense to be allowed to customize it to be a different number, dividing this column into two or three views (of course as new views are opened - it just makes the floaters start to appear with more views). This is much easier to get with what I have, but once again I’m not sure it’s that needed in 2D painting (I’m personally ok with just two of those in split screen).

But I would like to know how much needed is ability to have this column on the right, for left handed people (don’t matter so much now, but in the future I want the canvas and reference have a bit different behavior) and customizing the split to be vertical instead of horizontal.

I used it when I was finishing a comic page. It works like a charm so far. to start, it makes closing multiple windows easier after exiting Full Canvas mode because the subwindows are now positioned in a way that’s not beyond Krita’s boundary.

I’m so glad it works

the things toggling canvas-only mode was doing to subwindows were always driving me crazy. So happy they won’t do that again

Although snapping floaters to other floaters and border of window which is getting larger, is still to be done

Thank you for your detailed reply! I think you have a good point, making each window splitable might actually make things more complicate than they should be. Making only the reference view customizable makes sense. I looked into the code and I have to admit that it is a bit too advanced for me

I know - it was way more advanced than any krita script I wrote so far. But just in case anyone would like to try to understand it, here is the main idea:
using qwin = window.qwindow() in createActions I can get the access to the krita window. Then qwin.mdiArea() gives the workspace where all the subwindows are stored, and qwin.mdiArea().subwindowList() stores all the actual subwindows. Whenever any of these gets changed (closed, moved or resized) they send an event.
But I create something called eventFilter, which would intercept those events before they reach their destination. It just have to be installed to the object (subwindow or mdiArea) with object.installEventFilter(filter).
In the event filter I can write any code (like moving the subwindow to other position that the user dragged it into), or even prevent the object from doing this action (return true would hold the event, not allowing it to reach its destination)

Already thanked you in youtube, but i’m here now with the Kritacommunity, thanks for this plugin my friend.

I’m glad you liked my work. It gives me the need to continue and add new features to it (as there is still so much to be done here)

Welcome to the forum

1.1.0 feature update is here!
From now I will only distribute the addon via Github, so that the link stays the same, and I can easily modify the code.
You probably missed two recent bugfix releases so here is a whole changelog from 1.0.0:

I still need to make it all switchable, so that you can easily switch between tabs and subwindows mode. It would be awesome if the add-on could be shipped with krita someday (great responsibility, but I want to make it once the add-on really gets userproof). I would also have to prevent the user from using “always on top”, “tile” and “cascade”, and fix the remaining bugs before that. (there is a one crash on going out the split mode with ‘drag and drop’ that is very hard to reproduce, if someone manages to get the step by step instructions for making it happen, I would be grateful)

By the way link to the addon, as well as my brushes got merged into official krita resources page a week ago, though the site haven’t updated since then

But I hope that it will be available there soon.

Great main task, would be awesome if you achieve this.

On iOS I’m using iArtbookPro wich does exactly this and it’s a great way learn drawing/painting.

Ow, it seems there is always someone who had the same idea before

Currently I haven’t tried to get to those values in qt, but as I did this drag and drop operations, I believe I should start working on that somewhere soon