Just saw mixbox in action Mixbox - Practical Pigment Mixing for Digital Painting (scrtwpns.com)
They say it’s really easy to add, and I would love to have this mixing along with RGBA smudge brushes.

In the test demo itself colors already feel extremely fun to play with. My brain fills with excessive amount of dopamine thinking how RGBA workflow may change because of the mixing.

[Rebelle 5 Pigments - Physical Color Mixing] It does look like real paint no?

You can see mixbox has already been experimentally implemented in Krita by @urzeye, but currently that’s a no way for an official integration due to incompatible license

ty ty, gonna check it all =) (I actually already checked, was busy doing so)

Someone implemented it? I’ve replicated the paper myself, so I have the lookup tables. I’ve had some problems coding it into Krita; if someone has already done that I can simply use their existing code with my own lookup tables.

Hello and welcome to the forum,

If I’m not mistakenly remembering Mixbox was implement by one person, on a personal build of Krita. Only because the Mixbox Github was apparently really simple to implement, so it was a test / proof of concept on a solo capacity.

It is awesome that you made the the lookup table from scratch, but I don’t really understand what part of Mixbox is licensed. It is important to check if making the code and tables from zero avoid the license.

On another note, you can also follow the development on integrating MyPaint pigment mode into krita.

I realized the spectral mixing of mypaint in krita

Hello, I tried to add it to krita before. If you want to study or research, you can refer to this post ：About experimentally adding rebelle 5 pigments to krita

I’m not using any of their code. The hard part is generating the lookup tables; actually using them is fairly simple. The only question is what color space should those lookup tables work in, this can be tricky due to the limited precision of the tables (these are 8-bit or, at the very most, 9-bit tables).

It would be nice to use a color space with a gamut wider then SRGB. From what I’ve read LAB is too wide given the bit depth (though I’ve not tried it). There are a few other RGB possibilities, e.g. Adobe’s Wide RGB, and another one whose name currently escapes me (the one the web is moving to). I’ve not tried them though.

Anyway here is my somewhat horrible prototype code. It uses JS, WebGL and WASM. You can run it in your browser here. In my idle time I have implemented a number of unrelated features (like normal-mapped brush alphas), that I plan to. . .eventually. . .submit as additional patches (unless Krita already has them).

I see just like most digital art softwares, Krita has a linear RGB colour system, which can turn mixed colours dull/less saturated.
The RGB standard system works well and it’s accurate as far as an RGB System can go, but as Krita strives to make tools work as organically as traditional media, I believe it makes sense implementing a method that can also make the colours behave as real-life traditional pigments do.
I truly believe Krita could benefit from this, and make the drawing experience more fun, but also more captivating to traditional artists transitioning to digital art, and also to digital artists have more freedom to use colours without worrying too much about the dullness from the colours overall, which can be pretty frustrating. 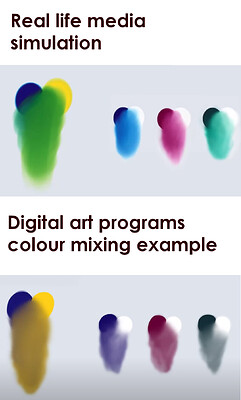 And here’s the website of MixBox where they present a video with an explanation on how this work and could be added as a valuable option to the painting program. 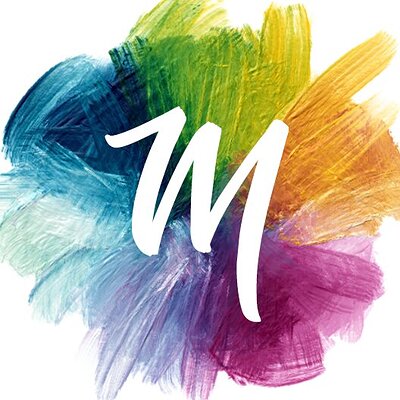 And the code example: GitHub - scrtwpns/mixbox: Mixbox is a library for natural color mixing based...

Hello and welcome to the forum,

You’re not the first, and definitely not the only one wanting ‘real life’ color mixing in Krita. Also, not the first to think Mixbox is a good and convenient solution.
Here some topics discussing Mixbox in specific:
Mixbox for Krita!
Implementing MixBox mixing for Krita
Resume: Mixbox has incompatible license and probably will never be implemented in Krita, as stand right now.

The alternative, which already has the heavy lifting done from what I understood:
I realized the spectral mixing of mypaint in krita

This has already been discussed several times in the forum, the last topic was this if I remember correctly:

[20211221214301] [20220116191605] This is just an experiment based on Add spectral blending of mypaint , as a research on the performance of rebelle 5 pigments in krita. But I have encountered a problem. When I only add the mixbox to krita’s pigment directory, lcmsengine will fail to compile. I have to add the mixbox to lcmsengine’s cmakelists again to compile successfully. How can I solve this problem？

Mixbox is private and incompatible with GPL.

@Joe_Eagar produced a version of GPL V3 based on their paper. You can follow the progress on GitHub: joeedh/pigment-painter (github.com)

Oh, I see, I didn’t know that. It’s such a shame it cannot be added. Although, I looked up and saw that the developers of Krita were trying to implement a similar function from MyPaint’s. I use MyPaint from time to time, and only now realized there is such thing a pigment blending mode that allows spectral mixing. I can guess it’s not an easy task making it happen since it works completely differently from the linear RGB space. But I still hope that they can add a similar blending mode for layers and brushes like pigment from MyPaint.

Sweet! gonna read more about it! thank you!

I see! Thanks for the answer.

Moreover mixbx with its current license policy can’t be implemented in krita.